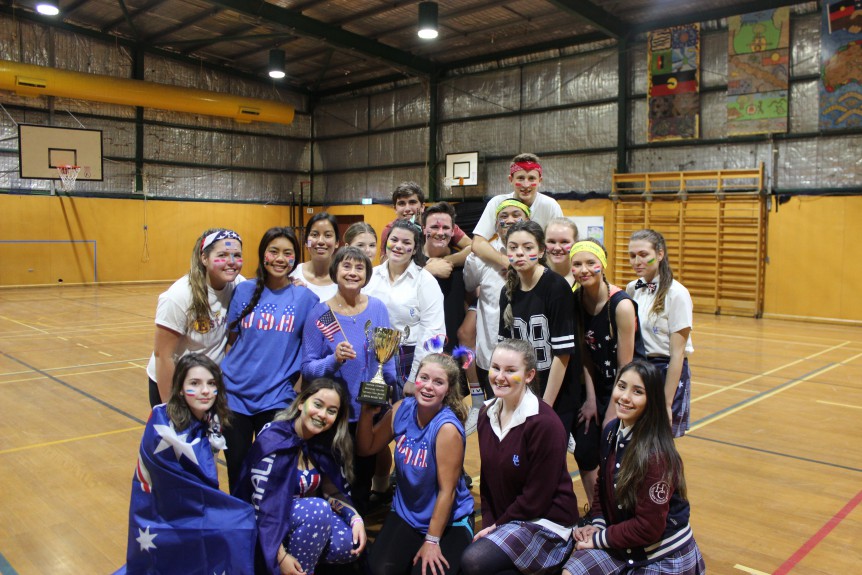 After a long day in the city, Wednesday brought forth a good day of relaxation at Hoppers Crossing Secondary College. Being at school, hanging out with the students and following them to classes is one of the Americans’ personal favorite things to do.

The local newspaper paid a visit to the delegates, took some pictures, and asked a few questions regarding our stay in Australia. Talking about Ballarat and the Great Ocean Road trip, it seems like ages ago, and the Americans still have more to look forward to.

During fourth period, the Americans had the chance to lead a Year 10 assembly-‘Eagle style’. Through loud music, dancing, and competitive games, the gym was what you would call “LIT”. The students were very much into it and brought forth their competitive spirits. There was even a guest performance featuring Jim Brown, Mr. Harding, and Mr. Halge that rightfully appeared on every student’s snapchat story.

Even though the assembly held many games, the games had only begun. After school it was time for what everyone was waiting for—‘Hoppers Cup’. The tournament is where America and Australia battle head to head. This year, three sports were played: Volleyball, Basketball, and Dodgeball. The athletes entered the gym decked out in their country’s colors and pride. Everyone knew this afternoon would get heated quickly.

Long story short, saying the Americans won is an understatement. It was more of an obliteration. Ten years in a row, the Americans cease to slip up. The cup is once again property of the Estancia Eagles. Next year’s Aussie delegation is going to go through rigorous training both day and night in order to be prepared for the next battle between AUS and USA.