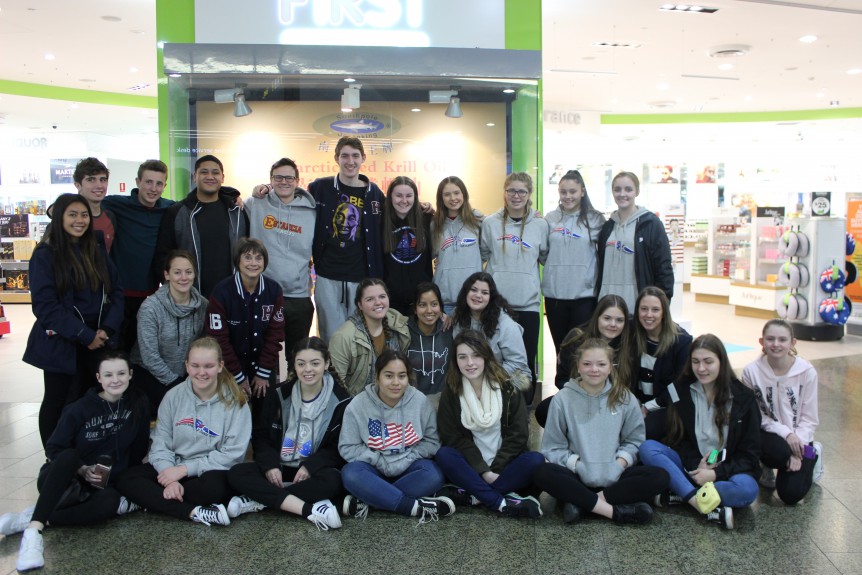 It was the last day that the Eagles spent at Hoppers Crossing Secondary College but before the school farewelled them; the Americans quickly had one last shopping spree before being greeted by the students.

The Eagles spent lunch playing against the team who won the Hoppers Crossing Secondary College tournament, which raised funds for the Year 10 Formal. It was a tough competition with both teams drawing at one all.

After saying goodbye to the College it was time to head to Geelong for the Americans to experience Australian Mexican food at Mojo Mamas. Hoppers Crossing students, parents and the Eagles enjoyed the dinner as it was a lot of fun and many laughs were had.

After the Mexican Restaurant we all headed to the Ghost Tour. Myself and the other girls on the tour, thought that the Werribee Mansion was scary but after experiencing the Ghost Tour we have to say that the Ghost Tour had us jumping out of our socks. At one point Lauren, Sam, Pauline and I were stuck to each other because we didn’t want to leave each others side.

Following the Ghost Tour, all the girls caught up for a sleepover at the Manic’s house! We spent the night having midnight snacks from Vegemite and Nutella toasts, to literally falling asleep on one another from a jam packed day. Overall this experience has helped to develop strong relationships with one another, the Eagles and the other host families are like my new family.

In the morning we spent breakfast together eating bacon, egg and toast. Then organised to go the Balla’s home for an Aussie Barbeque for lunch. Now the Americans can actually say that they had a “Shrimp on the barbie” in their attempted Aussie accents. It was great to just hang out with everyone and just ‘chill’.

After the Barbeque it was time for the Farewell Dinner at the College. It was great to be reunited with all the host families, City Council members, teachers and students. Bringing out all the Christmas decorations and feasting on a traditional Christmas roast. This was a memorable night.

Gifts were presented to the Eagles so they would remember this experience forever. A video was presented of pictures throughout the trip that brought so many memories of the trip to the surface and made me realise that I have made long lasting friends who are from the other side of the world and I know that I will always keep in contact with. The Americans were very grateful for this experience, to the host families and to the College as they had an amazing time while in Australia.

Today was the day that everyone was dreading; it was the day the Eagles flew back to California. It was an early start, as we were all required to be at Tullamarine Airport at 6.30am!

The Eagles and host students were all in denial of them leaving, we all thought that we would see each other the next day in the Conference Room at school getting ready for our next adventure. Once Mr Halge said it was time for them to line up all the tears started to pour out. Tears, photos and hugs were shared as we said our final goodbyes.

This was an amazing experience because all the life long memories that we shared and the new friends that we all made!