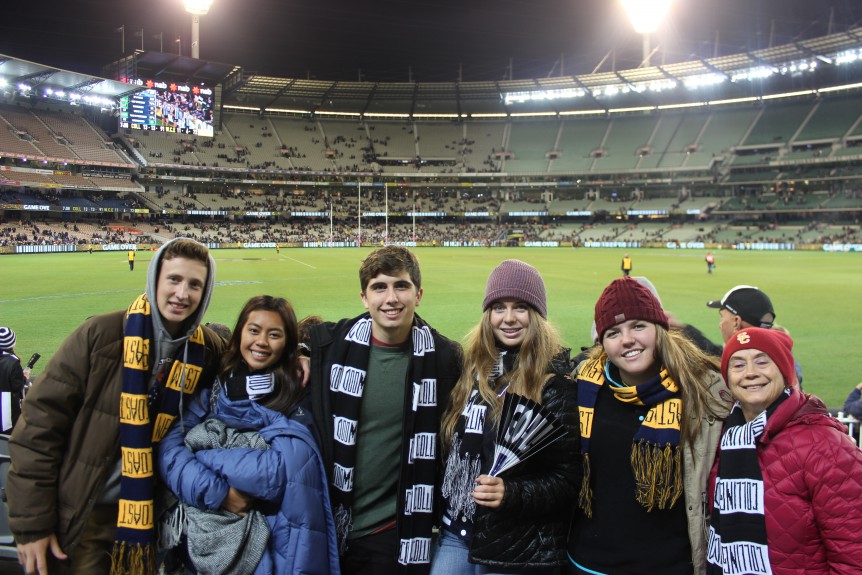 Today it was a quiet day at school as the American Eagles were all out visiting local Primary and Secondary Schools. After school, some of us went to our local shopping center, Werribee Plaza to celebrate the re-launch after a 3 three redevelopment. We had quite a fun time as we looked through all the new stores and took part in celebratory events. That night I had taken Liam to a Church Youth Activity where we both got the chance to lip-sync and dance to various songs. It is fair to say that we both deserved the awards of Best Solo Performers! Also that night we got the chance to attend Emma Oorluff’s Netball game at the Eagle Stadium. We met up with Ebony and Sam (2016 delegate). The game was a great opportunity for the American students to view some of our students participating in sporting activities. When arriving home, Liam and I played many games of ping-pong, watched movies and I eventually also squeezed in some studying in preparation for the next day at school.

On Friday I farewelled Liam at Hoppers Crossing Train Station by 8am and helped him to reload his myki pass for the first time. I had to go back to school unfortunately in order to complete a SAC. After completing my SAC, Emma and I made our way to the Docklands to meet the others. We had arrived at Docklands while the delegation was having a snack. Next stop was the Melbourne Star Observation Wheel, this was also my first time expiring this attraction of Melbourne. The city skyline was quite beautiful, despite it being a cloudy and dark winter day in Melbourne.

After a short lunch break at Nandos were I discovered some are more sensitive to hot chilli’s than others, we embarked on a tour of Etihad Stadium. At the Etihad Stadium we got an insight into the coach’s boxes, locker rooms, media rooms and got to sit on the bleachers on the footy oval. Overall the tour was really informative and we all had a great time. After transiting to Flinders Street Station via Southern Cross, we got to experience the Eureka Sky Deck. Here we were able to treat the American’s to ‘The Edge’ experience, which allows you to have an amazing view of the city whilst appearing to be floating above the streets and buildings of Melbourne. It was finally time to head back home.

That night, there was a church dance on the other side of the city, along with Liliana and my brother we attended this dance. It was a pretty good night and gave Liliana the opportunity to experience the difference in Mormon Culture here in Melbourne.

Day 7 – Ballarat, Kangaroos and Koala’s, Williamstown and the MCG

On Saturday, it was another early start in order to make our way to Ballarat. On the way there Mrs Hudson had to deal with 4 male teens and their loud music and laughter also with their shenanigans and their snacking, I am glad we were the ones making the noise and not having to put up with us! On arrival, Liam and I had purchased 2 bags of feed each and went to feed as many Kangaroos as we could. There were so many joeys inside the pouches of the Kangaroos it was just quite adorable. We saw the reptilian exhibit, which featured giant snakes, a huge crocodile, and many cute koalas munching away on their Eucalyptus leaves. Samantha Haynes and her clumsy self slipped on a muddy track getting mud all along her left leg and behind her jeans too. It was quite the sight to see it happen so suddenly, it certainly left a lot of people shocked and in laughter. After drying and cleaning herself off topped off with changing into a new pair of pants, we made our way to the café to play some card games. This is where I was introduced to the amazing Egyptian Rat Snap and my newfound competiveness. I had lost all games but astoundingly did pretty well for myself considering.

After a short nap and changing into some clean clothes, we headed to Williamstown for lunch and bumped into Mr Halge, Linda Tenno, Miss Smith, Kaisha, Pauline, Emma, Ms McIntyre, Samantha, at a Mexican Restaurant. As always lunch is not complete without a card game, in which I was taught how to play Black Jack. Again I had found a new sense of competitiveness and played to win. Fortunately at times I had a good hand and others had better. After lunch we all made our way into the city for the Collingwood (Pies) and West Coast Eagles (Eagles) AFL game at the Melbourne Cricket Ground (MCG). Getting to the MCG was tedious as there was heavy traffic with everyone keen to get to the game and support these two teams.

Jim and I had sourced a ‘Pies Paper Clapper’, which of course we used appropriately to make as much noise as we could, within the spirit of the game of course.. The Most exciting part was when the Pies had scored 3 consecutive goals in less than 5 minutes. Jim also had gotten a chance to have a meat-pie, which of course was not complete without a lot of photos being taken of him eating it. The Pies in the end came out victorious in which we can all say that Mr Halge was ecstatic about. On our arrival home Liam and I had played some usual ping pong and went straight to sleep.

On Sunday it was the family day. Liam and I had slept in quite a bit and rose at a nice 10am where it was back to the ping pong…again!! After that game I had made breakfast, bacon and eggs with toast, and invited Luke and Jim over to chill. They came over with snacks and games for the PS4 and we of course, played some more ping pong. Jim also got to meet my little baby brother Linkin, where I learnt that Jim loves hanging with babies. Jim taught me how to play Gin. They had to leave early as they were going out for dinner, which was cool as we would see them later that night. After they had left Liam and I got a haircut from my uncle and aunty who are barbers and hairdressers respectively. Liam and I both came out looking quite sharp if I don’t say so myself. After our haircuts we then had our dinner and wished my cousin who had come down from Brisbane a happy 22nd birthday. After all the celebrations Liam and I were off to the Hudson household for some more card games, this time playing ‘Cards Against Humanity’, Samantha won overall. Again this was an amazing night surrounded by amazing people and as always upon our arrival at home, Liam and I had played some ping pong. After our games we had called it night as the following day he would go on his trip on the Great Ocean Road.