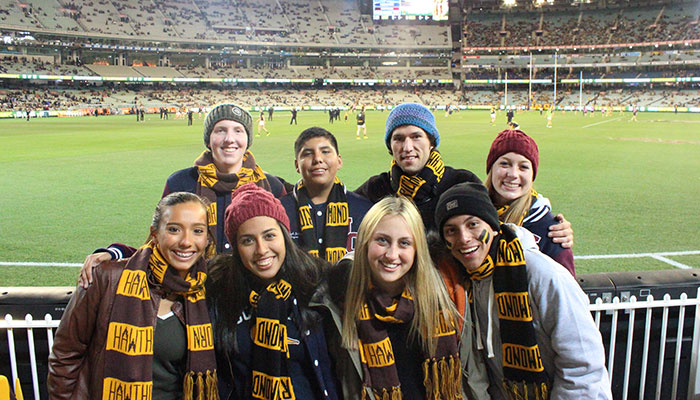 The 2015 Estancia Delegation have settled into the cold Melbourne winter and embraced it like a true Melbournian. Sunshine one moment, pouring rain the next!

The delegation visited their first school in the area – Manor Lakes P-12 College. They were greeted warmly by staff and students and were shown around the College which caters for students in Prep, right through to Year 9. Students were able to watch some classes in action and gain an insight into the primary education provided to students in Australia.

Once back at Hoppers Crossing S.C, the delegation and students boarded the bus to go to Fun City. The group had a go at Go-Karting and Laser Tag. Andy Palomo was the victor of the day beating Mr McClanahan by a blink of an eye. The girls dominated in laser tag, and in the USA vs AUS match, the Aussie won. Great day had by all that attended.

On Friday, everyone met at Hoppers Crossing Train Station to board Melbourne public transport and head into the Melbourne city centre. The first stop was Degani’s Cafe for some Coffee and Hot Chocolate which was followed by some Ice Skating at Medibank Icehouse. After a quick lesson everyone headed out and gave it a shot, some looking more natural and graceful then others!!

The Melbourne Star Observation Wheel, was up next at Melbourne’s infamous Docklands precinct. The ride on the wheel provided a bird’s eye view across Melbourne and Port Phillip Bay. After lunch we enjoyed an informative tour of Etihad Stadium (Sporting Stadium), visiting AFL club change rooms and stepping out onto the field. The same evening was the highlight, being the AFL match between Hawthorn and Richmond. Sitting in great seats the delegation were able to experience the excitement of a true Melbourne AFL game, it was an excitingly close game, but the Tigers (Richmond) in the end were too good for the mighty Hawks! Go the Tigers!!

Meeting at school at 8.30am Saturday after a late night at the ‘footy’ was a small struggle, this was not helped by the extremely cold and wet weather that greeted us. Once we reached Ballarat Wildlife park, the rain stopped (however the low temperature remained) and the delegation were able to get up close and personal with native Australian wildlife; Kangaroo’s, Koala’s and other wildlife.

Sovereign Hill in the afternoon allowed the delegation to try their first Aussie meat pie. YUM!! Here they were able to pan for gold, go on the mine tour and try their hand at the art of candle making.

Sunday was the first family day of the trip, with Tayler heading to the snow, Mckenna completing some shopping at Highpoint Shopping Centre and others heading to Bounce (Trampolining). This was a great opportunity for the delegation to spend some time with their host families and relax, before a another fun filled week ahead.

The delegation departed the College this morning at 7.45am to begin their trek down the freeway to the Great Ocean Road….
Ms Firkin – International Programs Coordinator